Call for Art and Article Submissions for the 2023 Certain Days: Freedom for Political Prisoners Calendar

The Certain Days collective will be releasing our 22nd calendar this coming autumn. In lieu of a 2023 theme, we are doing  an open call for abolition-related art and article submissions to feature in the calendar, which hangs in more than 6,000 homes, workplaces, prison cells, and community spaces around the world. We encourage contributors to submit both new and existing work. We especially seek submissions from people in prison or jail, so please forward this call to any prison-based artists and writers.

Why no theme?, you ask. Since 2008, the Certain Days collective has developed a theme for each year’s calendar. During our “off season” this year, the collective has been weighing the decision of whether to continue this project or wrap it up. After much deliberation, we are going full-steam ahead with a 2023 calendar and decided to do an open call for submissions. While “transition” may be a great theme for us, at this moment, we leave it to you, trusted artists and authors, to submit what you think would be a great fit for our 22nd calendar!  Download as PDF

Due to space limitations, submissions may be lightly edited for clarity and concision, with no change to the original intent.

The Certain Days: Freedom for Political Prisoners Calendar is a joint fundraising and educational project between outside organizers in Montreal, New York, and Baltimore, and current and former political prisoners, including currently imprisoned Xinachtli (s/n Alvaro Luna Hernandez) in Texas. We were happy to welcome founding members Herman Bell and Robert Seth Hayes (Rest in Power) home from prison in 2018, and David Gilbert in 2021, each of whom spent over forty years behind bars. All of the current members of the outside collective are grounded in day-to-day organizing work other than the calendar, on issues ranging from legal aid to community media, radical education to prisoner solidarity. We work from an anti-imperialist, anti-racist, anti-capitalist, feminist, queer- and trans-liberationist position. All proceeds from the calendar go to abolitionist organizations working for a better world. 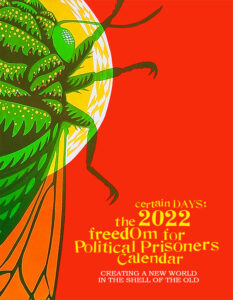 We are happy to announce that sales for the 2022 Certain Days: Freedom for Political Prisoners Calendar (our 21st edition) have begun!

In the U.S., order from Burning Books (Only $5) or in Canada, order 1-9 copies from Left Wing Books.

Certain Days 2022: Creating a New World in the Shell of the Old

The Certain Days: Freedom for Political Prisoners Calendar is a joint fundraising and educational project between outside organizers in Montreal, Hamilton, New York and Baltimore, with  Xinachtli (s/n Alvaro Luna Hernandez), a political prisoner being held in  Texas. Founding members Herman Bell, Robert Seth Hayes (Rest in Power)  and David Gilbert were  welcomed home from prison in 2018 and 2021.  Learn more about them at certaindays.org.